“We present this award to spotlight the companies that enable others to achieve energy transition. They don’t often enjoyed the limelight,” says Inger E Pedersen, business development manager at the North Sweden Energy Agency.

The 2018 Climate Champion of the North prize was awarded to SunPine with the following jury motivation:

“Green Transformation – SunPine. For their work in providing us with a greener way forward. Their tall diesel will help reduce CO2 emissions on Swedish roads by 250,000 tonnes per year. Now they’re committed to increasing production by a further 50 per cent, which is a significant contribution towards the transition to fossil-free fuels.”

The Climate Champions received their award at the important energy conference “Refining the World in Norrbotten” on 6 November in Luleå at the Clarion Hotel Sense. David Lundman and Ulrika Hagman were present at the awards ceremony representing SunPine, where they received diplomas and applause.

“Naturally, it’s incredibly rewarding to represent a company that has contributed so palpably toward a climate-smart Sweden and being recognised in this way is a fantastic feeling. Who wouldn’t want to have ‘Climate Champion’ on their business cards?”

“It’s especially pleasing that they’re aware we’re currently investing and expanding our capacity at SunPine in Piteå. We’ll be able to increase our production of tall diesel, which is marketed by Preem under the name Evolution diesel as Sweden’s only Nordic Swan eco-labelled diesel.” 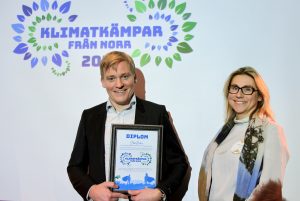 Two happy Climate Champions – David Lundman and Ulrika Hagman, both from SunPine, after the Climate Champion of the North prize giving at the Clarion Hotel Sense in Luleå.